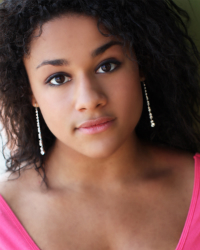 Ariana is a Raleigh, North Carolina native and a graduate of Wake Forest-Rolesville High School. Her many credits include both the title roles of Cassie in A Chorus Line & Aida in AIDA (both with Broadway Series South); Grease at North Carolina Theatre; a finalist contestant on Fox’s hit show SO YOU THINK YOU CAN DANCE (season six); and One Life to Live (Star Crossed Lovers Series). Ariana also originated the role of Nautica in Andy Blankenbuhler’s BRING IT ON the musical.

Just recently Ariana made her New York debut in Steven Sondhiem’s COMPANY with the New York Philharmonic starring Neil Patrick Harris, Christina Hendricks of Mad Men, Stephen Colbert, and the great Patti LuPone.  The show played in movie theatres across America in June of this year.

Ariana visited Carolina Dance Company in July of 2011 during the “Master Class Series” as a guest jazz & lyrical instructor.